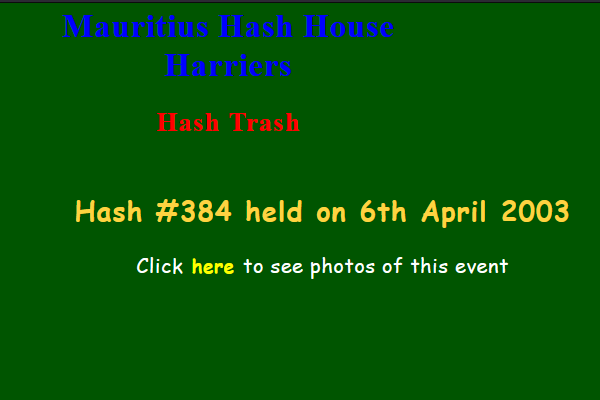 On On:
Hares Front and Centre:
Rosemary and Jack, Jackie and Bob, were brought on to the concrete podium reserved for our On On event for a deliberation on their premeditated act of pleasurable torture (for most of us)!
As we are all a bunch of perverts anyway, we highly commended them with Excellent.
Oooou!! wasn’t it nice going up those hills?! “Ooooh Yes”, “More please”
Oh, my God! I heard some of them say… at the offer of a sip of water as their legs and other things turned to jelly.. In fact, this happened to our GM very early on, after the first metre up!! (Read in this what you wish, but I saw him take a dive into the tall grass.)
Well those who were blurting out those suggestive exclamations, were also privileged to witness some of the most breathtaking views we’ve ever seen! Always with method in their madness those Hares!
Half way up (and up, and up, and up) and around we saw a strange marking: BN! Meaning… Be Nice? Big Nerds? Bend Now? No no no. It meant Beer is Near! Bunch of Nerds!
The Hares having covered the trail on four wheels, pre-empted that the runners may run out of steam and would need refuelling. How right they were! So with renewed energy, after having reduced the beer stock to depletion and taken in the unspoilt view, we tackled the rest of the trail.
This time down, down, down and round, round, round we went towards home with a last bit of hill to negotiate – just so we could finish as we started: heavy breathing (like the GM?) and tongues hanging. There were lots to be appreciated on this run! Its good respectable length (GM?), Hills galore, nice weather, hard path for us to avoid the traditional shiggy if we so wanted, the famous BN and last but not least, the good crowd which turned up and the good spirit it brought. Three cheers for the Russell/Domaingue coalition. When it was all over, we were informed that we had just climbed MOUNTAIN Creole !

RA’s Down’s Down’s: Chosen theme: Good news and Bad News
Good News: The RA presented the GM with a Swazi T Shirt offered by the Swaziland Hash Grand-mistress. Actually there was a T Shirt and model. The GM rejected the latter!!
Bad News: Our RA had 4 Downs Downs on the Swaziland Hash because he wouldn’t stop talking about the Mauritian Hash. Made a real hash of it all!

Now on to the punishments:
Juliet for running a beachwear company
Gilbert for boasting having downed 8 whiskeys and 1 bottle of wine the night before and .. no Headache!!
That’s because there is nothing in it to ache!
Claude for sneaking on Jean …., Jealous of his pristine look.
Richard for failing to recognise Beer at the Beer Stop!!

Christening:
Phil: He is always well creamed off. Should he be L’Oreal ? Is he Worth It ? Or should he be Smelly Down Under ? What about Joker in the Pack ? Sleep on it, suggestions invited. (Use our feedback page)
(Filthy Phil ? – Note that he works in the drain business – Bob).

Jimmy the Greek with an unpronounceable name: No problem there – Bollockopulos.

Hash food:
A big Hooray for Anand. Many thanks for well planned and delicious grub.

Smelly Blue T Shirt:
The lucky bearer of the SBTS until the next hash is Tom for ‘Cruise’ing down a hard short cut.

Children’s Award:
Found itself in the arms of Isabelle (lucky thing !)

Scribe: Coffee Mate. ON ON…

Announcements:
1. Inter Hash will be held in Mombassa in May 2003. See our “News” page for details
2. Would hashers please note that there is a deposit (money) on glass bottles (beer, softies)!  Please do not throw them away with the rubbish.
3. St George’s Ball will be held on April 26th. Hashers welcome if on best behaviour. See news
4. The Hash on 20th April will be an Easter Bunny run.  All to wear suitable attire.
5. No Hash on the 20th April (Easter in case you didn’t know). Next Hash on 4th May.

Directions to next Hash to be held at 10 am on Sunday, 4th May 2003
Take the “Auto route” South towards the airport.
Turn right at the second new roundabout towards Gros Bois / L’Escalier.
Follow this road until you hit the coast road at L’Escalier.
Turn right and follow this road until you come to a kind of a ‘T’ junction.
Turn left towards Benares / Riviere des Anguilles.
At the next roundabout, turn left into Chateau / Benares.
Follow the Hash signs. (Or follow the blue line on the nice map below)

If you would like to read news from the MHASH in the future, simply subscribe to our Newsletter.